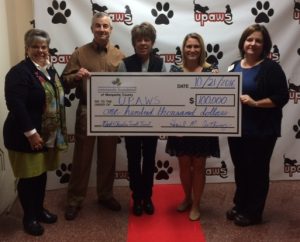 At its sold-out annual fundraising gala, the Upper Peninsula Animal Welfare Shelter announced the public kick-off for the Imagine the PAWSibilites: Campaign for an Animal Community Center. The kick-off included a $100,000 challenge match from the Troudt Fund at the Community Foundation of Marquette County. From October 22 through December 31 every dollar given to the capital campaign would be matched.

UPAWS reached $100,000 in gifts on December 29th; at that time Mark and Christine Troudt pledged another $10,000 to match any gift received or postmarked before the end of the year. At the completion of the challenge, UPAWS is excited to announce that approximately $120,000 was given in honor of the Troudt Challenge and will now receive the full $110,000 challenge gift. These gifts came from over 250 individual donors, businesses, and foundations. The board, staff, and volunteers of UPAWS are honored to have such amazing support from the community.